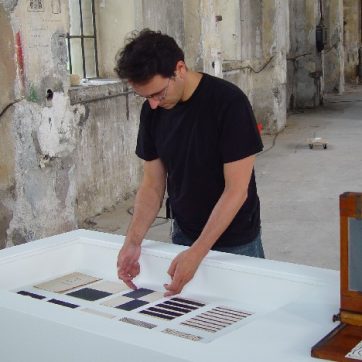 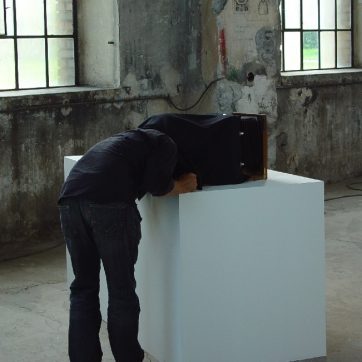 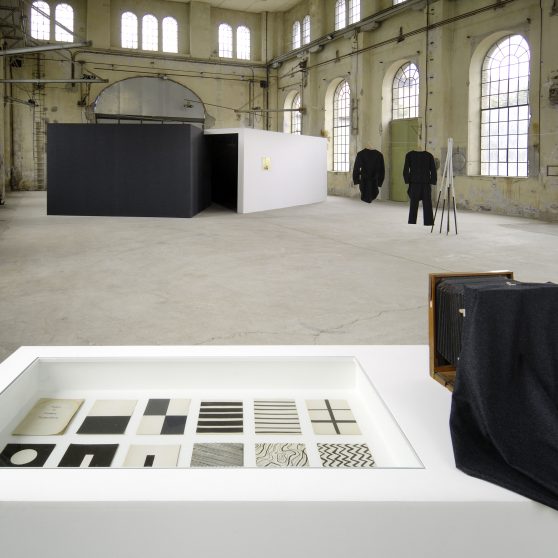 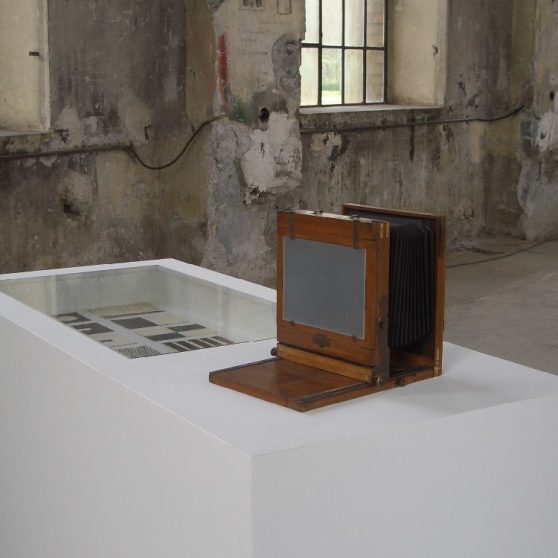 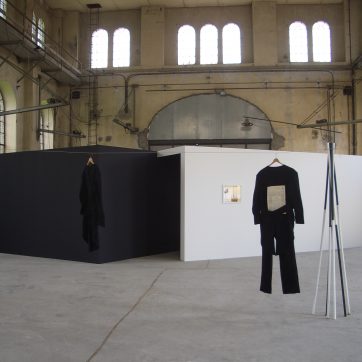 Simon Wachsmuth’s installation for Kunstraum Dornbirn plays on the formal vocabulary of museum presentations and, among other things, recalls the staging strategies of natural history museums. Thus his installation is indirectly connected to the nature-study museum Inatura, housed on the same premises as the Kunstraum Dornbirn.

In contrast to an accurate or scientific means of narration, Wachsmuth fills his showcases and cabinets with objects and objets trouvés that, although they come from a natural science context, on closer inspection appear peculiarly combined with further strange quotations. In this way he induces a different way of thinking and perceiving, which is strikingly different from the tiresome over-correctness of (natural history) museums. Using mimicry, Wachsmuth imitates the way museum presentations engender authority through their serial arrangement. The associative and paradoxically arranged interplay between the showcase contents and the exhibition objects soon makes it clear that any authority that has thus been assumed here will be undermined. It is these irritations that activate the viewers into developing their own reading of the situation.

In the vitrines, certain historical-cultural ways of approaching nature are set up via a discourse on the sciences, landscape painting and landscaping. Anyone who knows Simon Wachsmuth knows that his reserve of anecdotes on the subject is inexhaustible. Whereby what interests him, above all, are the cultural and technical reference fields and objects that symptomatically inform us of the specific developments and complexes of our late-capitalist society.

An example of this is the camera obscura that, in the form of a bellows camera from 1911, has been placed at the start of the exhibition and invites the viewers to take a “picture” of the entire installation. The principle of the camera obscura was for centuries considered to be the model for “rational” viewing. It stands for a standardizing and static way of looking that is based on the simultaneity of the cause of perception, the representation and the viewer. It assures a rational order and a control over the given. This model of stationary representation was first shaken in the 19th century and specifically by means of the new insight that sensual experience and its object do not directly correspond. Perception is seen today not as a duplication of reality, as in the camera obscura, but as consisting of the construction of a subjective perceptual reality comprising a combination of signs influenced by various factors.

The painting “Artists Crossing the Austrian Alps” by Heinrich Reinhold has been given a special functional place in the exhibition. It can be found on the invitation, poster and catalogue cover, as well as in one of the vitrines. It is a picture that is devoted to itself. The title alone points to its self-referential subject matter: a landscape artist paints landscape painters out searching for subjects for their landscapes. Reinhold belonged to a school of landscape painters from the early 19th century whose mission was to hold a mirror up to nature and systematically imitate it. But in two videos he produced for the exhibition, Simon Wachsmuth parodies how very much any imitative and duplicating process, with its media and technology, colors and co-determines its object of study and, in addition, has its own blind spot, i.e., how difficult it is to guarantee a ‘neutral’ and scientific description of nature.

The figures of the landscape painters in Heinrich Reinhold’s canvas have taken on a life of their own. Dressed in black historical suits from an urban context, they have taken on different poses in the mountain scenery. While in the sober black and white of the one video their activities gravitate towards a series of absurd-abstract compositions, the other video, shot in color through the camera obscura, evokes the aesthetic of a fairytale film. A third video is juxtaposed against these two in which we see abstract-like shots of clouds and smoke, filmed in black and white. Exempt from being mere formal elements, they are an ideal motif to demonstrate the potential of the constantly-shifting processes of form creation.

In making his images, Wachsmuth consistently deploys the polarity of black and white as an artistic device. Against the background of his work with oppositions, his installations seem exactly like the concepts taken from a deconstructive project. The exhibition in Kunstraum Dornbirn is dominated by one white and one black box that are interlocked. With this installation Wachsmuth not only plays on the fundamental forms used to present art in the twentieth century – the white cube and the black box – but also with the sculptural objects of Minimal Art.

At issue for Simon Wachsmuth are the building blocks that make up an exhibition’s rhetoric. In the Kunstraum Dornbirn he has directed their stage appearance in a wholly theatrical manner. Historic-looking costumes, hung from a cord in the gallery, at first seem mysterious; are we in a museum of folkloric culture or in a changing room between illusion and reality? Within Wachsmuth’s discursive never-never land association, other debates on theatricality and Minimal Art can of course also be understood as ironic commentary.

According to Michael Fried’s famous article “Art and Objecthood”, Minimal Art is disqualified as a genre of the visual arts, among other things, also by its changed reference to the viewers, and so ‘degenerates’ to the histrionic. Simon Wachsmuth is interested in the curiousness of such essentialist, purist value-systems, as found also within the minimal artists’ own discourse. Minimal Art’s dubious claim to refer to nothing other than itself, which equally points to its imprisonment in a modernist tradition, can be summarized in Frank Stella’s tautological dictum, “what you see, is what you see”. The title of Simon Wachsmuth’s exhibition reads like a paraphrase of this: “The things which I have seen I now can see no more.” This title, itself a quotation from a poem of latent cultural pessimism by the nature philosopher William Wordsworth, introduces the aspect of time and thus the process linking the old and new views of things. The choice of this quotation is in itself typical of Simon Wachsmuth’s polyvalent and interconnecting work. He is interested in exactly the moment at which the view of things shifts, when they slip into another context and mutate.

The quotation stands within the exhibition for the epitome of the transitory, for the unending potential for change of the form-creating processes. And Simon Wachsmuth rings all the changes in his negotiation of an exhibition rhetoric and in dealing with representations of clouds and landscapes, as well as in his critique of simplistic, standardizing theories. 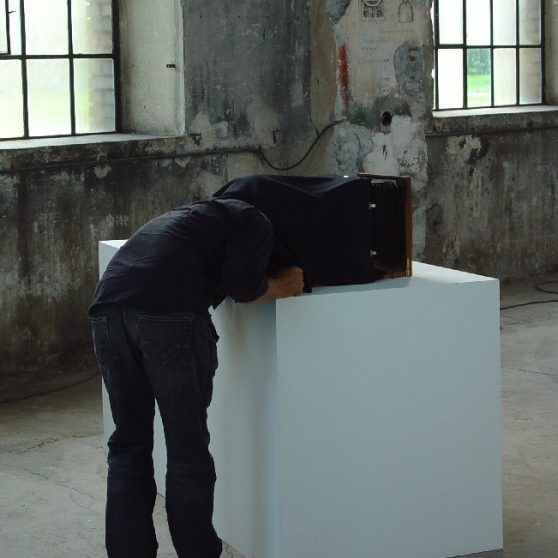 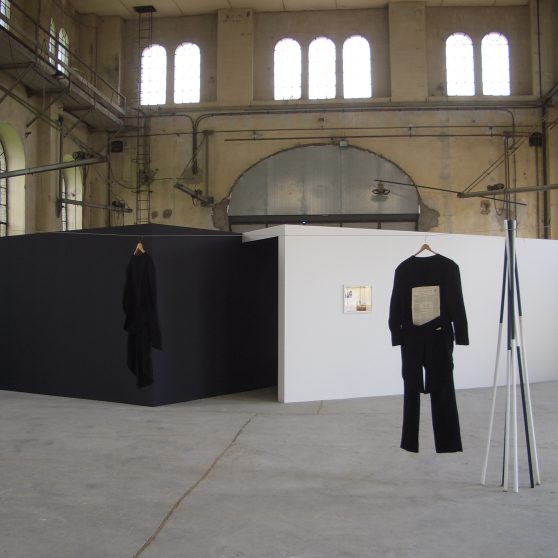 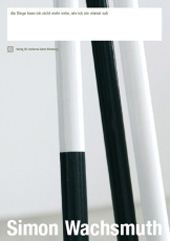