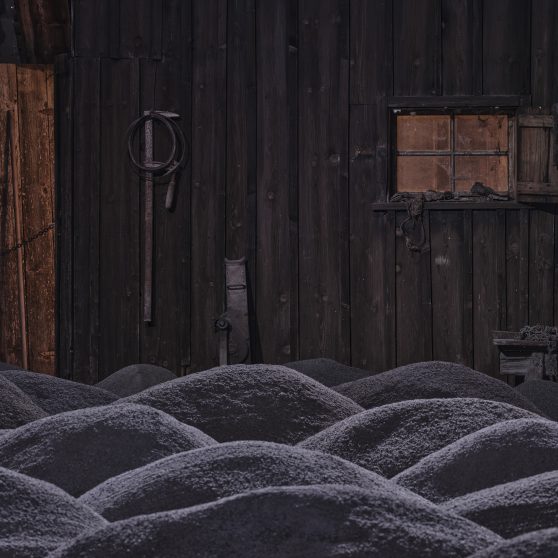 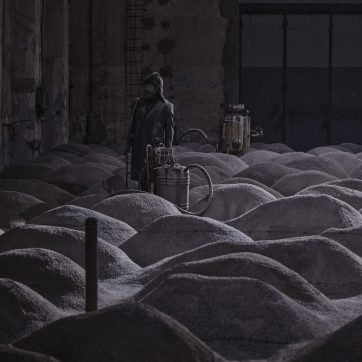 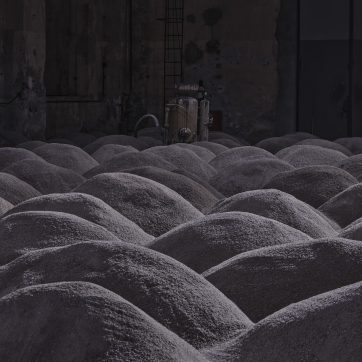 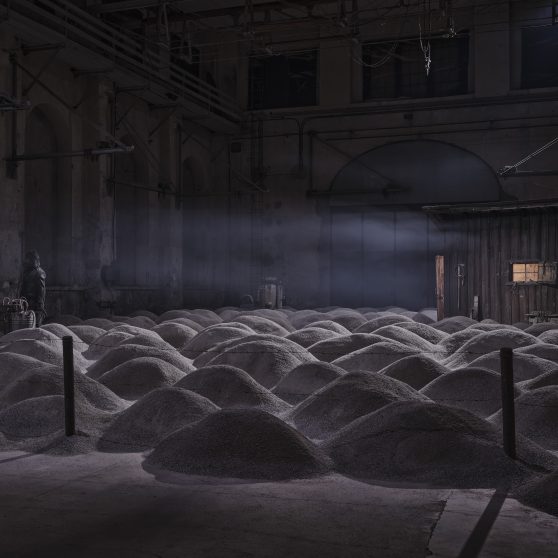 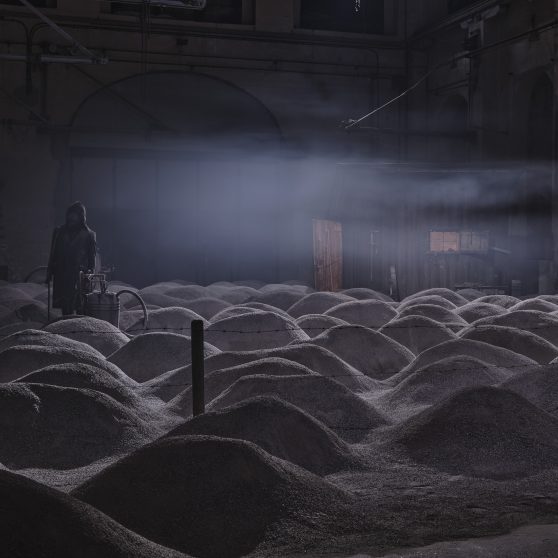 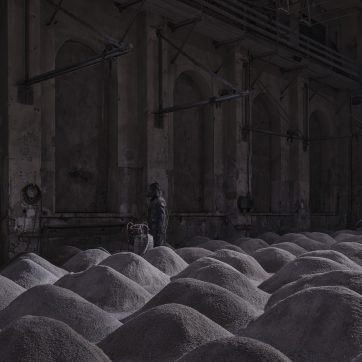 Please find the polish translation of the text by scrolling down.

For Kunstraum Dornbirn, Robert Kuśmirowski (born in 1973 in Łódź, Poland) has created a new site-specific environment entitled DUSTribute. In the former assembly hall of the Rüsch Works factory, he has developed a post-apocalyptic scenery that completely transforms the space. Visitors find themselves in a world whose appearance resembles a fictional journey through time. Historical, cinematic and narrative reference systems interweave to form a story of existential peril and eerie beauty.

The artist occupies the entire hall, which formerly served as a machine works’ fitting shop and today functions as Kunstraum Dornbirn’s exhibition space, eliminating the tall transom lattice windows and shutting out outside influences. Sand piled up into mounds covers the entire floor of the large hall. In addition to a small wooden shed, a human figure can be made out in this inhospitable world. Working tools, machines and wooden carts are now dysfunctional representatives of a bygone era.

Visually and atmospherically, Kuśmirowski’s new work at Kunstraum Dornbirn is based on the film classic Stalker (1979) by Soviet director Andrei Tarkowsky. It is about an area known as the “Zone”, which the military has sealed off after the occurrence of mysterious incidents. The nameless stalker (a local guide) leads customers into the forbidden region, helping them avoid the dangers lurking there. With his help and for different reasons, a professor and a writer seek to enter the “Room of Wishes”, which legend says is a place where the most secret wishes come true.

At Kunstraum Dornbirn, Kuśmirowski places his protagonist in a reconstruction of the gloomy scenery of this room. The sandy ground and the diffuse light create a magical world in which the human figure ekes out an existence in harsh, lifeless surroundings by daily labour, in hope of a better future that never comes. Even worse, time seems to stand still. The oppressive, anxiety-filled mood is reinforced by the inscrutable beauty of this mysterious parallel world.

Kuśmirowski evokes the narrative potential contained in his works through the re-enactment and staging of past times. The historical references spring from collective and individual history and are mixed with fiction and imagination. The resulting image testifies to a handwritten, unique and independent way of artistically appropriating the concrete world. It draws visitors in and lays claim to all the senses. The confrontation with mystical, decayed or destroyed places guides our uneasiness through the experience of obvious abandonment, human absence, and the consternation induced by an apparently perfect staging of past time in the present. Fascination is fed by a sense of the uncanny.

Kuśmirowski’s works are medially diverse and take the form of installations, environments, prints, objects, photographs, drawings and performances. His immersive spatial installations communicate an aura of decline, conveyed by the patina of detailed recreations of objects and sceneries. His staged doublings take up a deliberately ambivalent stance towards memory and the shaping of historical narratives.

A catalogue will be published to accompany the exhibition. 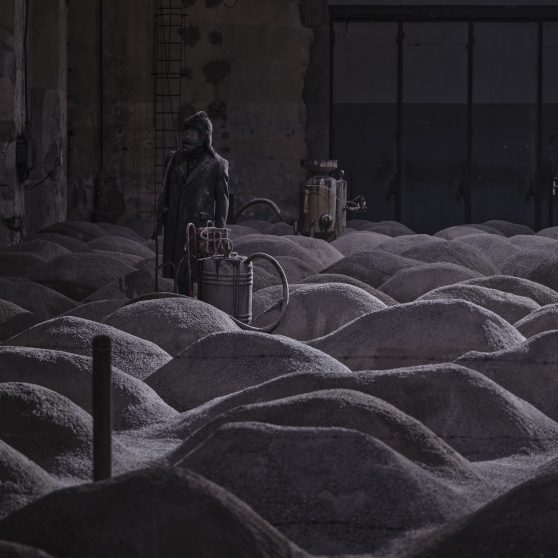 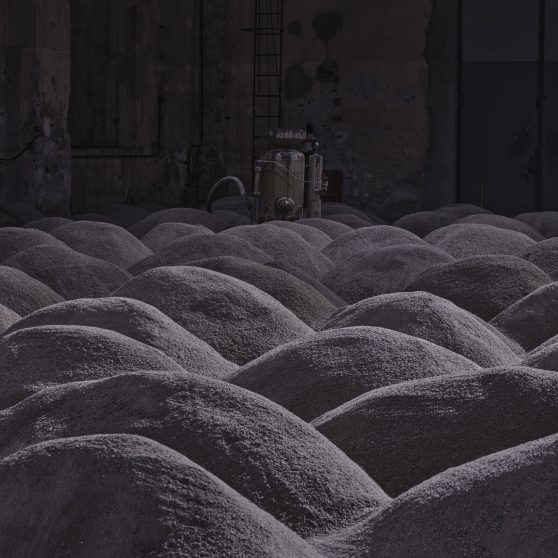 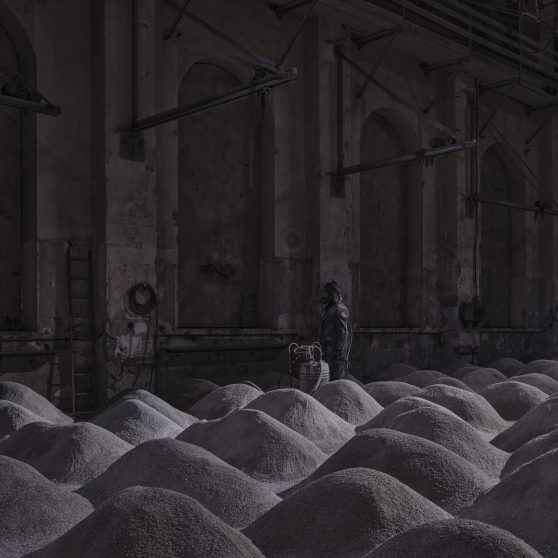 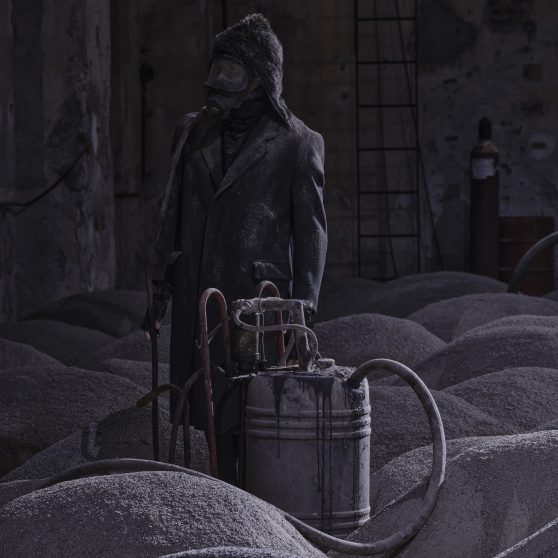 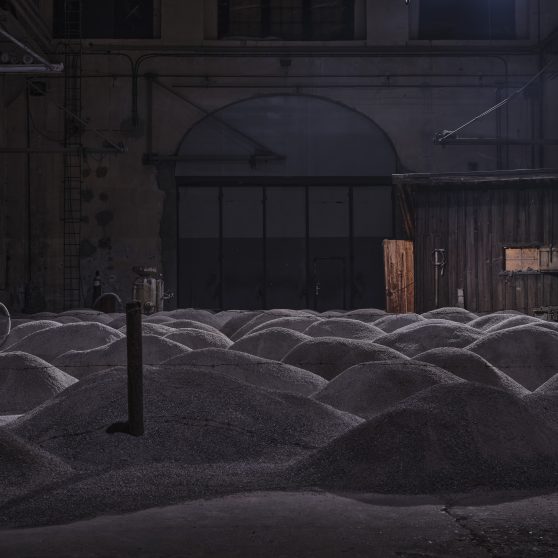 Robert Kuśmirowski, Railroad depot, 2007, Courtesy of the artist and MuFo in Krakow 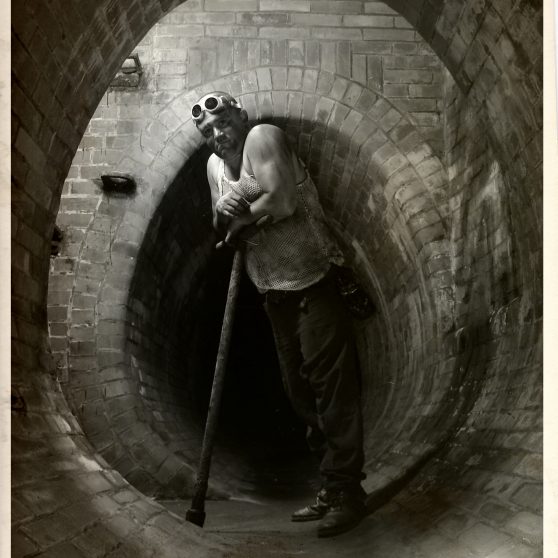 Robert Kuśmirowski, Sewerage, 2008, Courtesy of the artist and the Foksal Gallery Foundation. 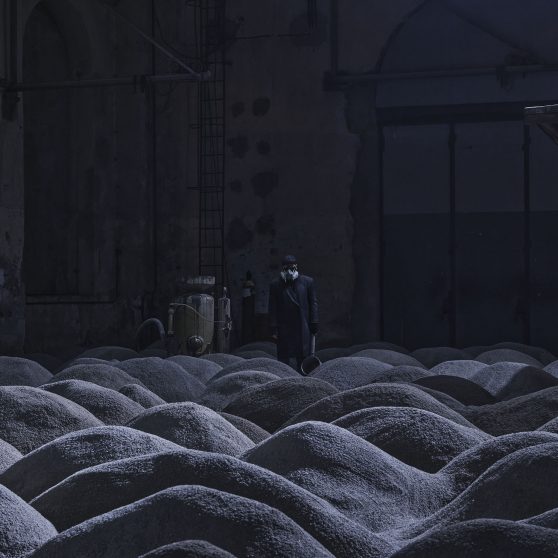 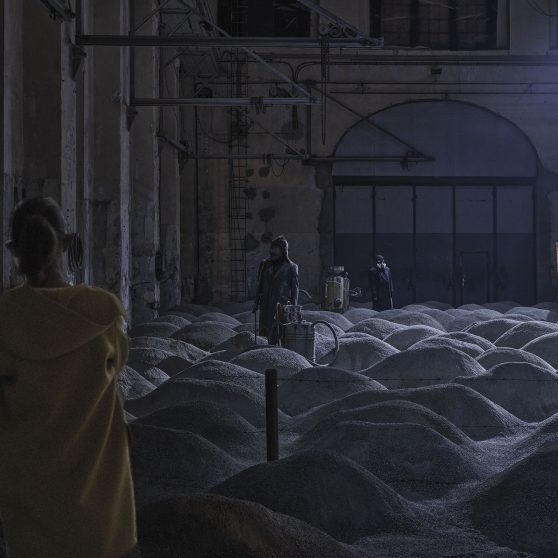 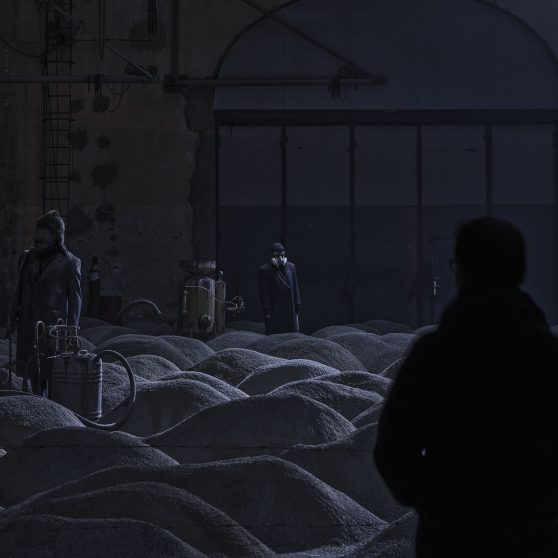 The image files are available to you in the context of announcing and reporting on the exhibition by Robert Kuśmirowski at Kunstraum Dornbirn (25 March –  29 May 2022).
Reproductions must be accompanied by the name of the artist, the title and date of the work, the copyright and, where indicated, the name of the photographer. Please note here the specifications accompanying the respective caption.
Reproductions may not be cropped, overprinted, toned or treated derogatively in any way, or used for marketing or promotional purposes without prior permission from the copyright holder.
If you have any questions about the context, use and content of the images, please contact Sina Wagner, sina.wagner@kunstraumdornbirn.at.