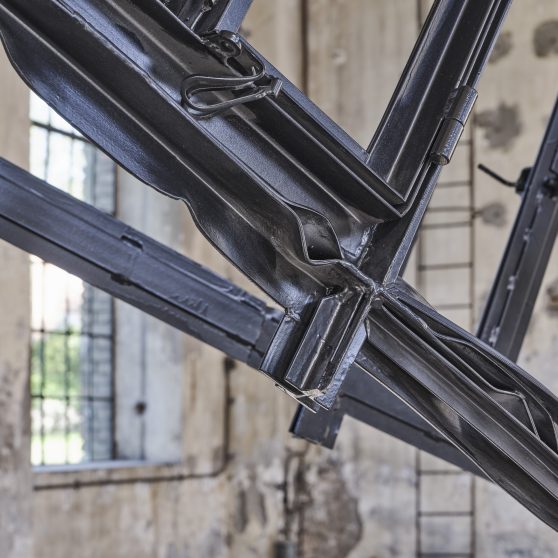 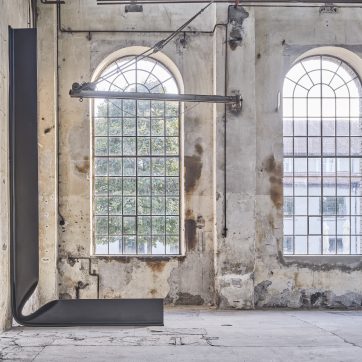 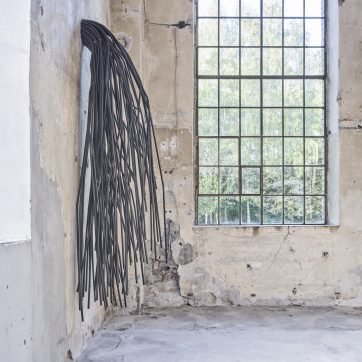 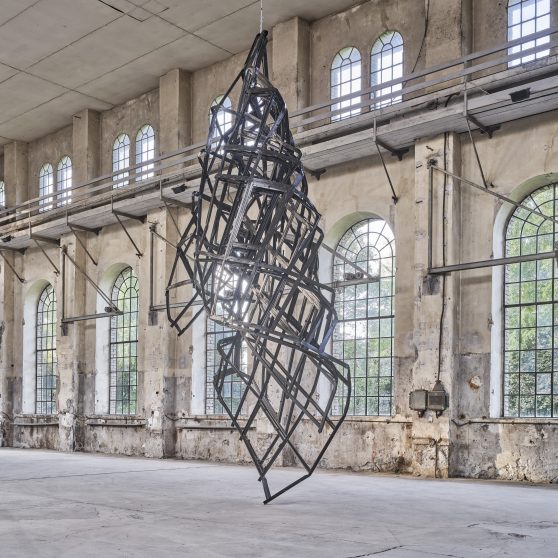 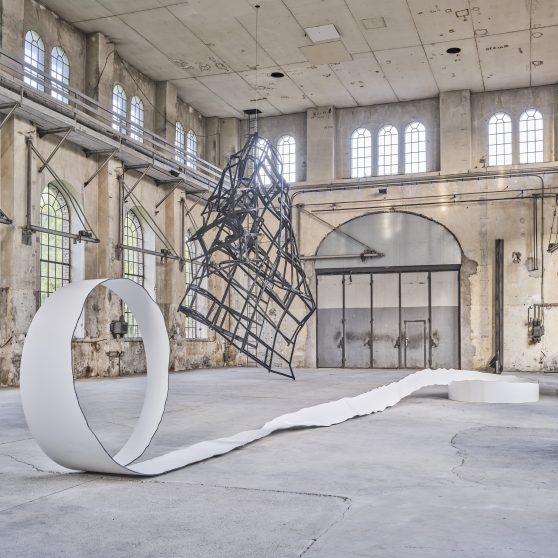 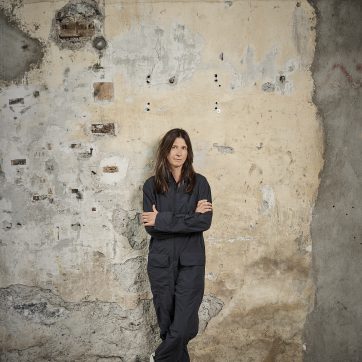 Monika Sosnowska’s expansive sculptural works seem familiar and yet strange in their aesthetic uniqueness. A bent T-profile of 5m height leans against a wall of Kunstraum Dornbirn. The bar curves up at the bend, the profile with its 900 kilograms no longer carries anything but itself. A steel tube with a diameter of 182 centimetres is torn through the middle, reminiscent of the tear in a sheet of paper, and rolled up over a length of 10 metres. The beginning and end of the tube are circularly intact, lying and standing in space. Next to it hangs from the ceiling a 7.5-metre-high folded steel scaffolding that rests lightly with one corner on the floor. A bundle of steel struts protrudes directly from the back right wall of the exhibition hall. As if bridled by gravity, they resemble a kind of oversized ponytail.

Sosnowska’s massive sculptures convey a disconcerting lightness that withstands only briefly the quick, humorous gesture of manipulating industrially produced construction elements. The heavyweight works are palpably inscribed by their production process; the lightness is counteracted and dissolved by the tons of materiality. The title of the sculpture T (2017) is based on not the resultant L-shape but on the source material – namely a load-bearing construction element that accommodates static demands and is largely invisible after the construction process. This is also the case with the steel struts of Rebar 16 (2017), a bundle of 16mm thick reinforcing bars whose surface provides good adhesion for the surrounding concrete to withstand tensile and compressive forces in the building compound. The white former pipe Sosnowska designates Pipe (2020) and calls the hanging lattice structure Facade (2013). In the latter case, 1.3 tonnes of material heaviness weigh on the singular suspension, and pointedly and ironically indicate the point of contact on a corner of the floor. Sosnowska doesn’t imitate building materials in the now much-vaunted form of the 3D printer; instead she has them industrially produced, that is, fully functional in terms of construction technology. She appropriates the characteristics of the materials by taking their function to absurdity through forceful manipulation after they have been produced. The finished parts are bent and warped until the material is fatigued and yields to the new form, which it then unalterably assumes and bears. In the process, chance and speed play a dwindlingly small role. Instead, the choreography inherent in the works is predetermined in models and drawings, the load-bearing capacity of the structure is well thought out and the spatially suggestive effect is precisely set. Intrinsic in the works is a dysfunctional reference to their original purpose, capable of generating a special aesthetic and poetics.

Sosnowska provides us with a contextual shift par excellence. Skilfully, she oscillates between contextual disclosure and sensual experience. The beauty of her works stands on equal footing with the technical, historical and psychological components of her strategy of artistic appropriation. She includes us collectively and individually, thematising our built environment, our living space and social co-existence through the use of building elements which, in their temporal permanence and fashions, conflict with or sustain the respective present.

Sosnowska’s artistic view of the built environment is closely linked to contemporary historical developments. In Facade, this is conceptually impressive: the artist lives in the Polish capital Warsaw, whose massive destruction during the Second World War resulted in an architecturally difficult, diverse adaptation of the cityscape controlled by the respective regime interests and, nowadays, by investor money. Social processes are expressed in architecture. Economic, social and cultural parameters find a concrete embodiment in the built space. This is what happened in a four-storey building clad in glass and steel, built in 1963 in a conscious departure from the socialist realism of the Stalin era and in contrast to the neo-traditionalist construction of the neighbouring buildings in the 1940s and 1950s. In 2011-2015, the building had to be redesigned to meet current usage requirements, and the steel and glass façade was in a very poor and thus no longer sustainable condition. The redesign by the architects Diener & Diener caused international discussion with polarising criticism and praise among experts.

This story is symbolic of numerous other examples in that shaped cultural and social life in Poland in the course of history after the Second World War and through the socialist period. All of this is present as background noise in Facade – for the reproduction of the now replaced steel construction for the building’s curtain wall, which supports only itself, is the basis of Sosnowska’s work. She had the construction reproduced in all its individual parts and on a scale of 1:1. After the perfect replica of 8 x 10 metres was completed, the forces of industrial construction machinery were brought to bear: a lengthy process of bending, tugging, folding and pulling; it took three months for the sturdy material to give way, to conform to their new form. In folds and twists, the originally rhythmically structured façade now hangs dramatically tangled and bent on a single rope.

In Facade, Sosnowska transfers the steel framework of the iconic curtain wall of post-war modernism, once celebrated as a sign of modernity in Mies van der Rohe’s buildings and appreciated as high engineering art, into the institutional space of visual art as an independent design. In this new location, all Sosnowska’s works reveal her approach to space and architecture not only on a structural and physical level, but also on an emotional, psychological or historical one. The core elements she works with address and thematise tendencies of Polish Constructivism of the 1930s, the international phenomena of minimalist and conceptual art of the 1950s and 1960s, and modernist architecture of Eastern Europe in its contrasts and contradictions. Buildings are understood as places of experience, places of memory, with all the historical, political, psychological and anthropological markings that have been inflicted on the architecture over time. The interplay of all four works with the rough, untreated architecture of the former assembly hall of Kunstraum Dornbirn results in a psychosocial image of our history and present.

Sosnowska was born in 1972 in Ryki, Poland. She experienced the change of her country’s political system from communism to democracy and its potent social effects. In 2003, she gained international recognition with her work The Corridor, an intervention at the Arsenale exhibition of the 50th Venice Biennale. Four years later, she represented Poland at the 52nd Venice Biennale with the monumental installation 1:1.

A catalogue will be published to accompany the exhibition. 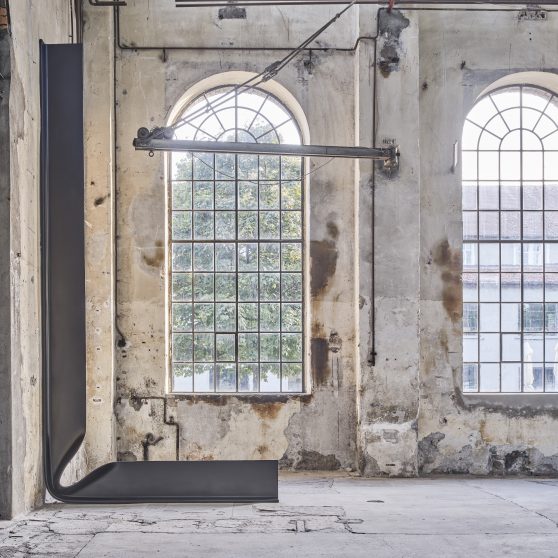 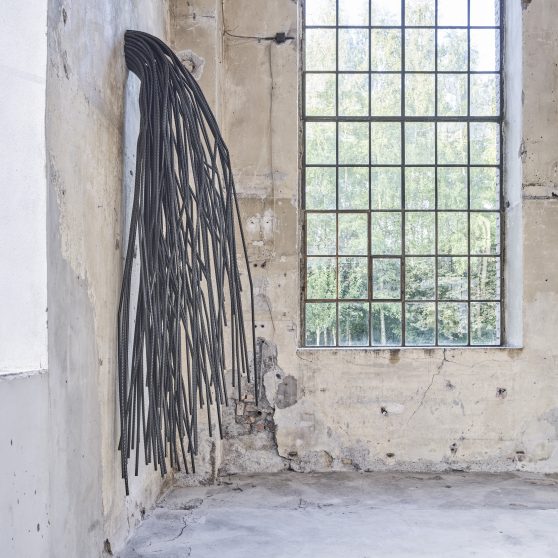 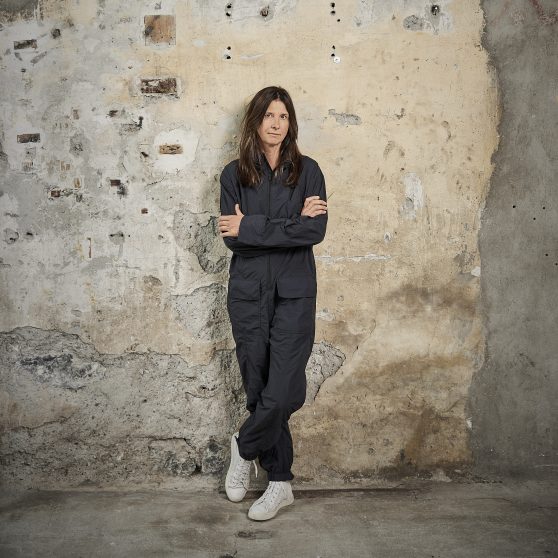 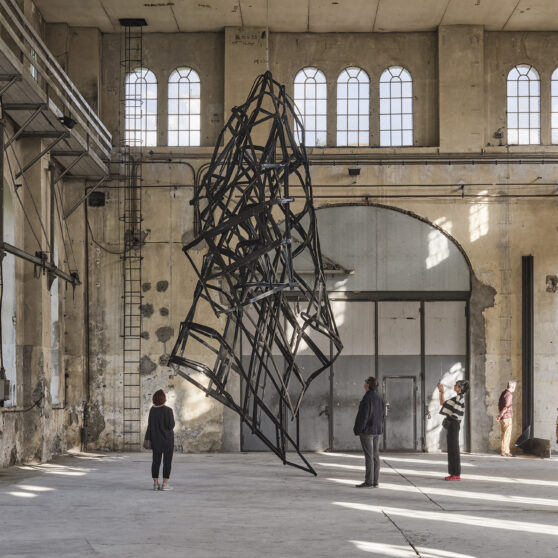 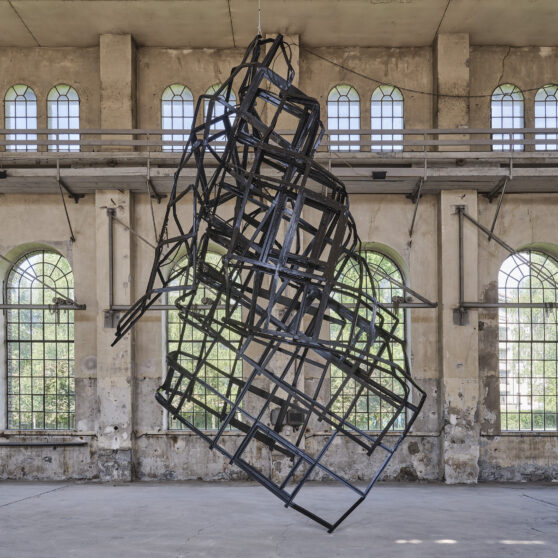 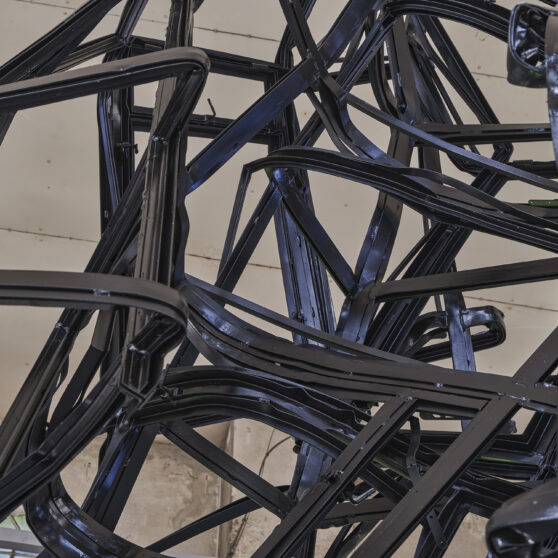 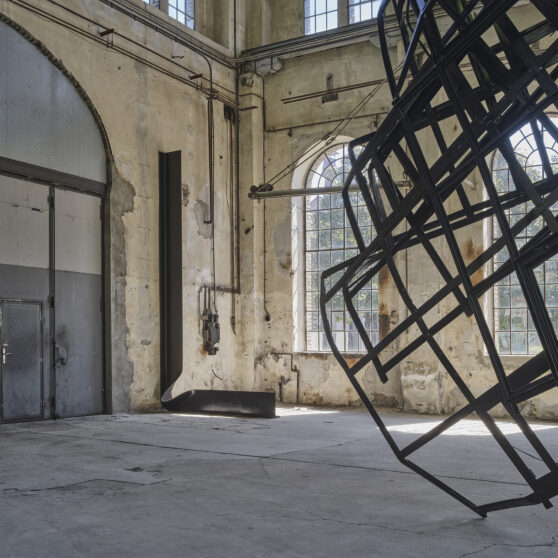 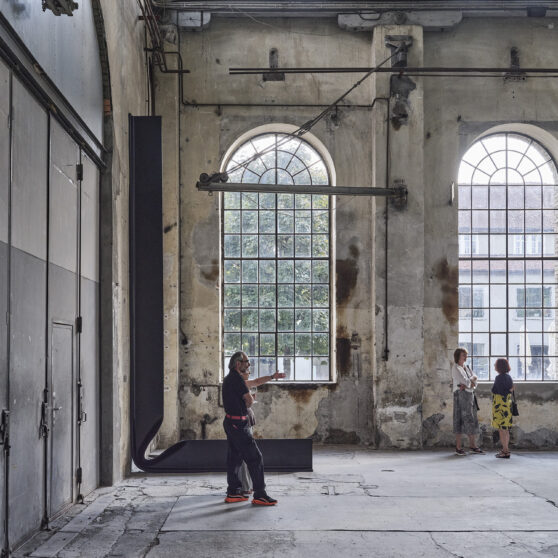 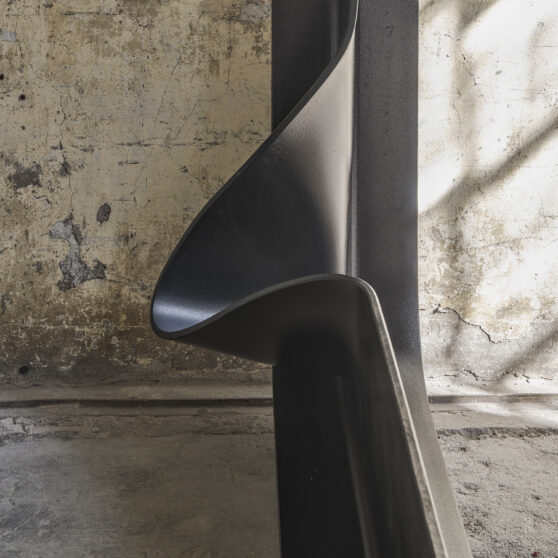 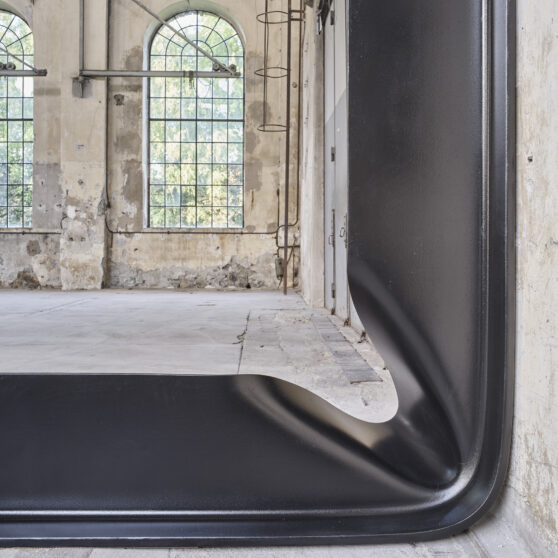 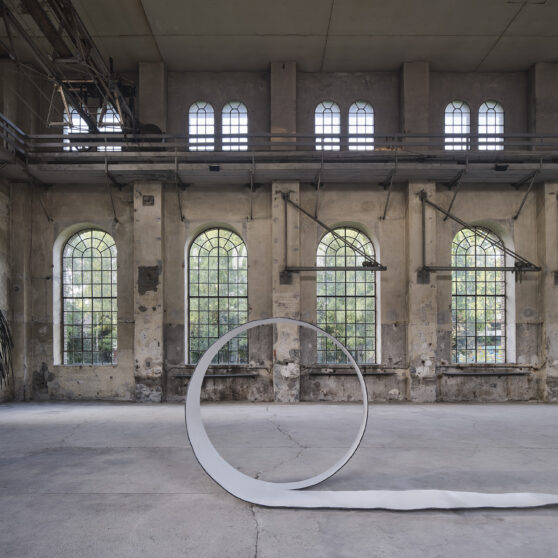 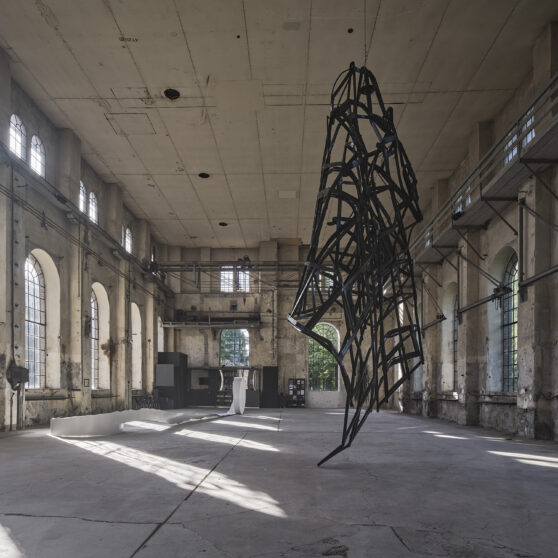 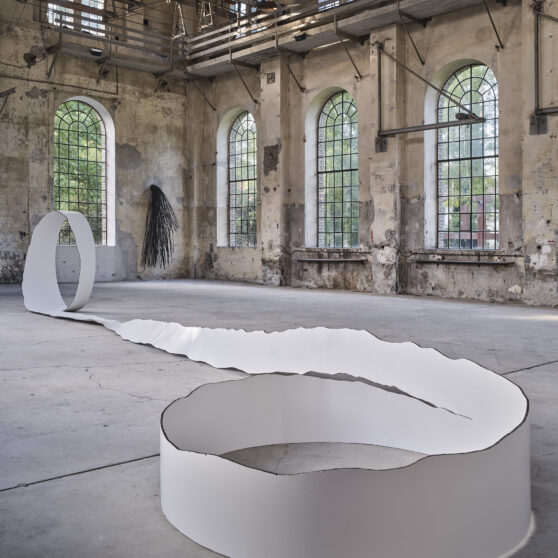 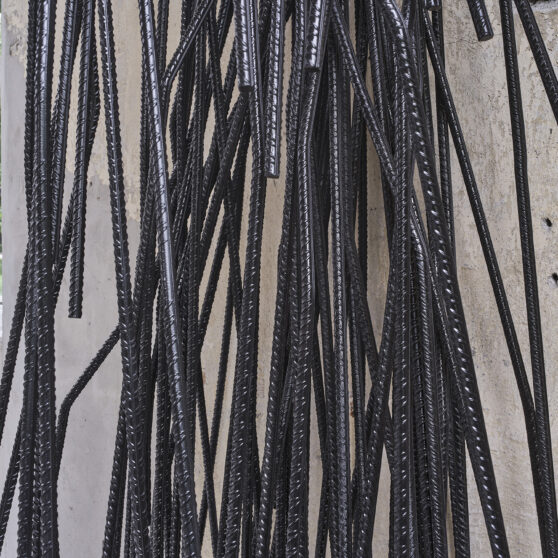 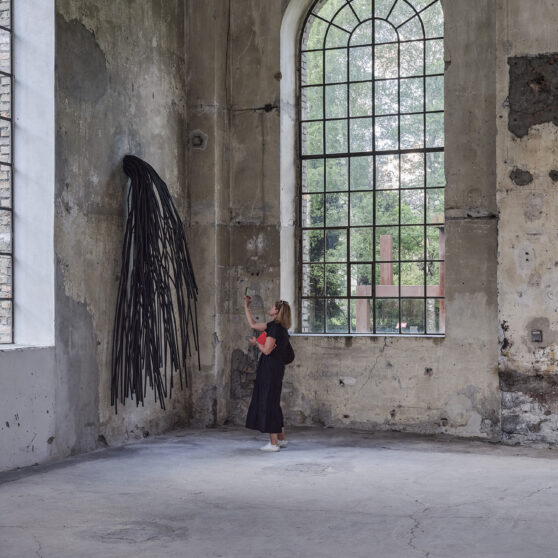 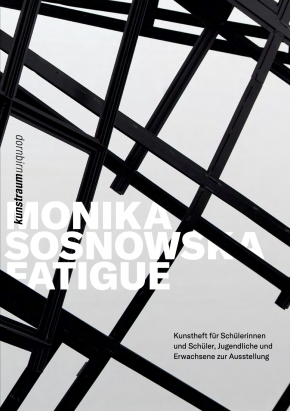 We are publishing the popular german speaking art booklet "Kunstheft" for the exhibition "Fatigue" by Monika Sosnowska. The leaflet offers all visitors interesting access to the work of the Polish artist. The author Prof. Martin Oswald has provided teachers with valuable tips and cross-references. 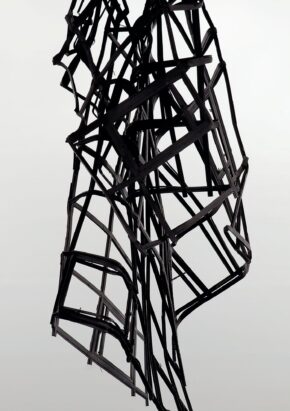 The catalogue will be published on the occasion of the exhibition "Fatigue" by the Polish artist Monika Sosnowska with a preface by Thomas Häusle and a text by Stach Szabłowski.

The exhibition can be seen from 17 June to 30 October 2022 at Kunstraum Dornbirn.

The image files are available to you in the context of announcing and reporting on the exhibition by Monika Sosnowska at Kunstraum Dornbirn (17 June – 30 October 2022).
Reproductions must be accompanied by the name of the artist, the title and date of the work, the copyright and, where indicated, the name of the photographer. Please note here the specifications accompanying the respective caption.
Reproductions may not be cropped, overprinted, toned or treated derogatively in any way, or used for marketing or promotional purposes without prior permission from the copyright holder.
Please don’t hesitate to contact us if you have any questions regarding the context, usage or content of the images:
Sina Wagner, sina.wagner@kunstraumdornbirn.at.