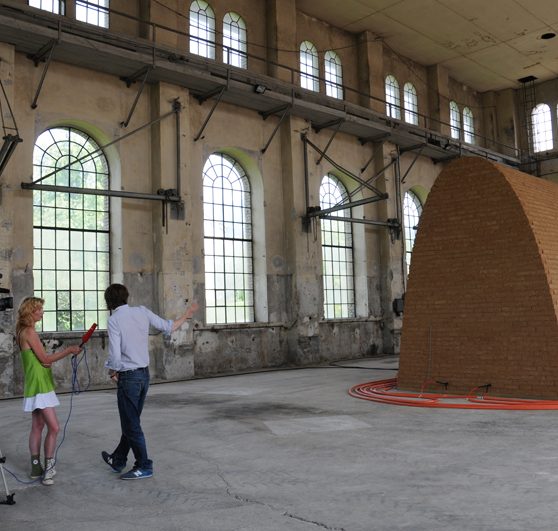 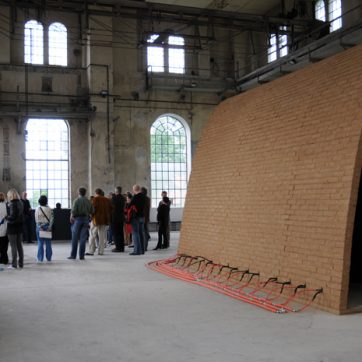 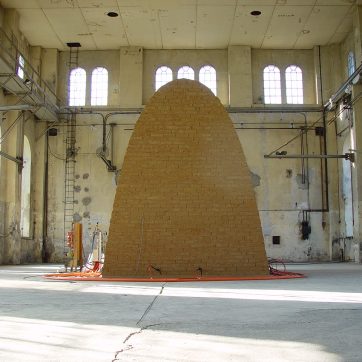 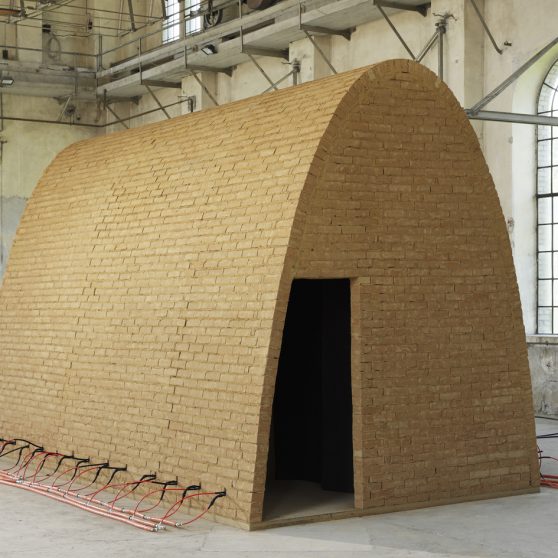 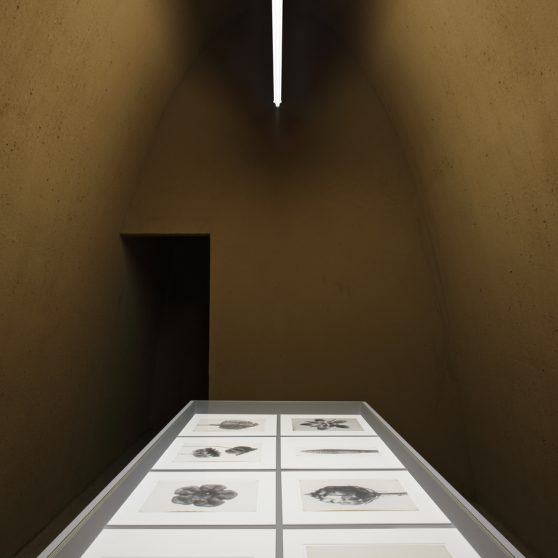 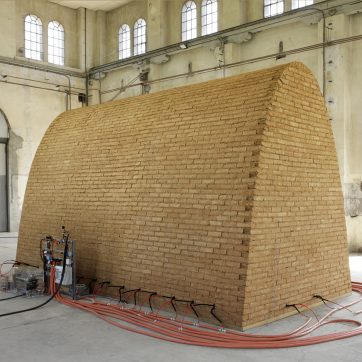 Simon Starling’s conceptual objective for his installation at Kunstraum Dornbirn is the experiment, thus turning the exhibition site into a test field for sounding out the difference between the idea and the function of a laboratory as well as of a classical institutional (or museal) presentation. Subject to the unregulated climatic prerequisites in the Kunstraum’s former 19th century assembly hall for the manufacture of turbines, the given exhibition situation takes place in a permanent state of transformation and change. External factors like light, temperature and humidity play a role in the listed building with its intentionally untouched interior just as much as do the visitors to the exhibition. These are factors that every artist who plans a project here has to consider. This means that Starling, in the run-up to his exhibition, also visited Dornbirn to examine the hall. The only restriction that was stipulated was the impossibility of presenting photography. This was precisely the restriction that sparked Starling’s attention. Thus the paradox occurred that supposed boundary lines can open new possibilities of consideration. A problem simultaneously implies a solution and, in this case, set an artistic process in motion.

In his work, Simon Starling studies objects, structural shells, materials and concepts as regards the aesthetics of a certain era, the given production conditions, as well as the cultural and political backgrounds. His narratively grounded sculptures and installations often contain the factor of transformation. The artist takes over the potential transformability of objects and cyclical structures, makes them his own and takes them a step further, sometimes overstepping the boundary to fictional associations. Starling makes latent recurring cycles visible and highlights unusual correlations in history, geography, art and society. One aspect of his artistic strategy is to set projects in an immediate, often site-specific context and then work with the resulting thematic contents.

Fundamental thoughts on the relationship between nature and modernism are reflected in the experimental process used to develop the project “Plant Room”. On display at the center is an exemplary selection of photographs by Karl Blossfeldt (1865-1932), who is one of the most important representatives of Neue Sachlichkeit or New Objectivity in the history of photography. From 1899 to 1930, Blossfeldt taught “modeling from living plants” in the educational department of Berlin’s Museum of Applied Arts, today the University of the Arts. Bronze models of plants and their details were produced, as well as plant specimens, all of which served as illustrative material for study. Even more significant are the photographs that were taken in the same period. Published in 1928 as “Urformen der Kunst”/proto-forms of art, these reduced, analytical images at the crossroads between naturalism and the avant-garde became known in the art world almost overnight.[1]

Simon Starling – who in his work probes the material, the form and the function of things, of structures and of phenomena and has, since the early 1990s, been increasingly occupied with modernist concepts – looked at Karl Blossfeldt’s photographs as regards the extrication of the form and the conceptual depiction of the vegetal thing-world. Blossfeldt’s entire oeuvre documents a moment in the history of art when the structure of plants was not only incorporated into aesthetically pleasing forms, but was also absorbed into the concepts of architecture and design. His photographs are not meant as illustrative images of plants, but correspond more to tectonic models that convey the concept of figurativeness.

Simon Starling, starting from the climatic conditions in the exhibition hall at Kunstraum Dornbirn, went on to develop his installation. “Plant Room” is in English the name for a machine room in large buildings and its function here is similar to a botanical greenhouse, however, one for the presentation of Blossfeldt’s vintage prints in correspondence with the conservational guidelines of the early 20th century. Following the design of a climate cell, which was preceded by an interdisciplinary and cooperative work process, Starling brought together the formal relations between the chosen photographic subjects, the technology required for a natural climate regulation and the mud brick architecture that was developed in this context. The body of the structure, whose plan has an abstract impact on the proportion and significant architectural design elements as well as on parts of the original furnishings of the assembly hall, was – as the starting point – simultaneously reduced to its functional construction and was free from specific cultural connotations. These latter, however, the viewers recruit themselves as projections that accord with the context of their respective cultural environment. The artist has here developed an enclosed, microcosmic system as a poetic revision, so to speak, a self-regulating lebensraum for Blossfeldt’s plant world.

At the exact center of the exhibition hall, the archaic, monolithic structure that reflects a primal architectural form becomes a meditative three-dimensional experience, whose interior offers us a constant show piece and its exterior a changing one. The monument made of loam designed by Simon Starling is at the interface between sculpture and architecture, tradition and technology, function and reception, against the background of established models of presenting art – “Plant Room” vs. white cube.

The white cube is primarily understood as an exhibition concept that presents art in neutral rooms so as to avoid any interaction between the architectural shell and the art object and to focus attention on the works on display. “A gallery is constructed along laws as rigorous as those for building a medieval church. The outside world must not come in, so windows are usually sealed off. Walls are painted white. The ceiling becomes the source of light,” as Brian O’Doherty wrote in the American magazine Artforum that published his essays on the series “Inside the White Cube”.[2]

As far as the discourse on the presentation of art goes, O’Doherty’s essay is still applicable today; the white cube is accepted as the conventional and most widespread exhibition form.

Kunstraum Dornbirn, with its exhibition hall within an industrial architecture and by its specification a non-neutral space and location, initiates situative exhibitions, i.e., ones that relate to and are necessarily involved in aspects of the local environs – a state of affairs that suits Simon Starling’s interdependent way of working just fine. In his project “Plant Room”, Starling at first studied the conditions within which the presentation of art is possible, probing the intense relationship between the fictive and the real exhibition room for photography. At the same time he took up the given atmospheric intensity of the monumental hall in his development of the sculptural shell, a room within a room.

A specific cell was conceived, a structure made of loam for presenting the photographs of Karl Blossfeldt. The cantenary arch constructed for this corresponds to the ideal form of a compression arch adapted to the desired dimension of the architecture, a form determined in the exhibition hall by hanging a chain from the ceiling to determine the highest point of the brick roof. Loam, which is one of the oldest in the history of European and non-European architecture, regulates humidity, stores warmth, binds pollutants and is completely recyclable.  Reinforcing the climate-regulating properties of the natural material, high-tech meets low-tech, whose differing elements and polarities Simon Starling has deliberately made visible in the installation. The edifice itself is made exclusively of loam, whereby the arching brick walls have been left rough on the outside and smoothly plastered inside; the floor is of stamped earth. Into this mud brick architecture – which perfectly naturally provides for an optimal balance of 50% humidity – a hydronic system was integrated so that water, a natural and traditional resource of the region, is piped in that guarantees the optimal temperature of 18° to a maximum 22° Celsius. The energy for the entire system, including the artificial lighting for the photographs, is supplied by a fuel cell. At the core of this potentially revolutionary energy source, which itself is a project under development, are platinum metals, which function as catalysts for the reaction between hydrogen and oxygen and generate electricity and water as a byproduct. In this way the construction is made into a closed circuit structure, a self-sustaining “life support system” for Blossfeldt’s photographs of ‘technoid’ nature, works that enter a formal and conceptual bond with the architecture.

For this project, Simon Starling has researched the archives of the University of Arts in Berlin and chosen these photographs by Karl Blossfeldt. His interest was aroused by less well-known prints than the subjects that, beginning with the first publications from the 1920s up to the commercially marketed postcard editions known to the broad public, had become iconic media images as part of the reception history of Blossfeldt’s work. The gelatin silver prints, arranged by Starling in pairs and surrounded by the organic architecture, allow visitors differentiated, individual and intimate viewing. By the means of an architectural stage-set, a three-dimensional backdrop and a machine, Starling highlights the character and the significance of the objects on show that themselves reflect the constructions of nature. The walk-in scenario is made up of an enclosure and the facility for an exhibition room including lighting and the display. The presentation of small, precious objects – here eight selected photographs by Blossfeldt shown in a neutral glass showcase that takes up the idea of the white cube – is based on the practice of the curiosity cabinets and Kunstkammer of the Renaissance.[3] By means of the vitrine, the museal situation of the availability and the simultaneous exclusion of the objects in the case is underlined, on the one hand, while, on the other, the specific design of the chamber – its associations to nature and technology that it additionally evokes – breaks down the distance to the pieces on display.

In the fine arts, the elimination of the stage and the auditorium – the working area of a theater – is a success.[4] Contrary to a conventional exhibition, the space in an art installation functions in a different way. Here the whole space of the installation is understood as an artwork, an art room. “The space of the artistic installation works in an entirely different way. Here, the whole of the installation space is understood as a work of art – an art space. [With Simon Starling’s “Plant Room”] the viewer does not stand in front of the work of art, but enters it, positioning his body inside the art space which, from the very beginning, is declared to be the symbolical property of the artist – not of the public, nor the visitor. Anything exhibited in such a space becomes a work of art only because it is placed inside the space which is an art space. The differentiation between art object and simple object becomes insignificant here.”[5] All the objects found in such a room become part and parcel of the artwork because they are in this room that itself is an art space. The difference between an artwork and a simple object loses its significance. In the hands of Simon Starling, the photographs have become working material, yet without calling the authorship of Karl Blossfeldt in question. Starling regards the photographs as an ideal source and so reactivates Blossfeldt’s original intention of a collection of models and thereby develops a new interpretation. 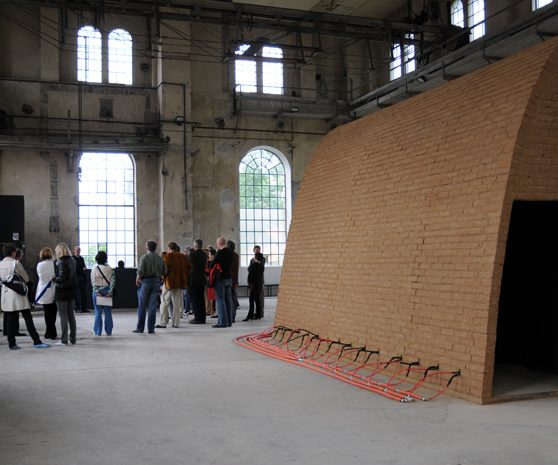 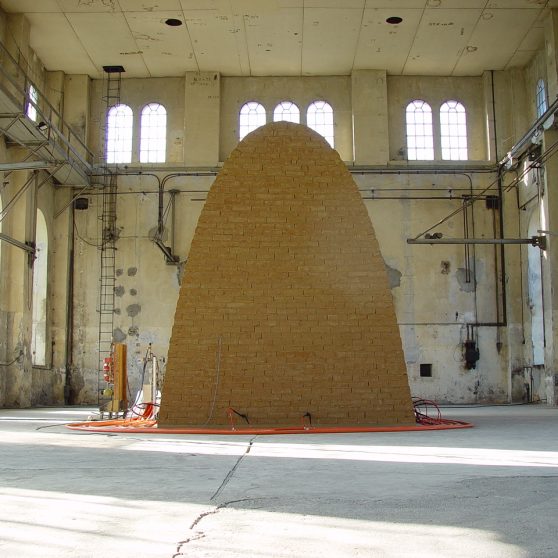 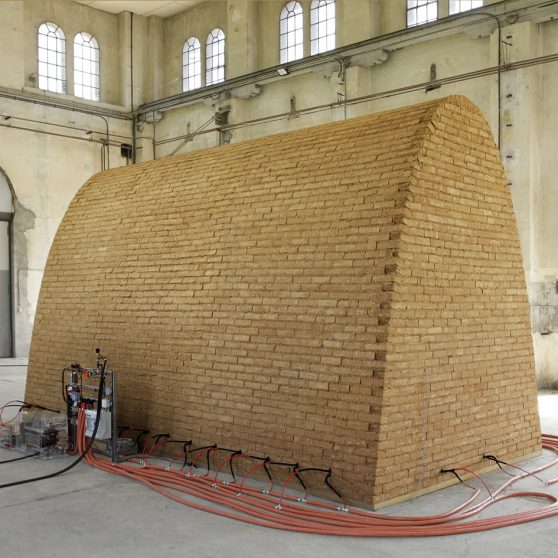 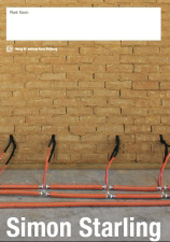