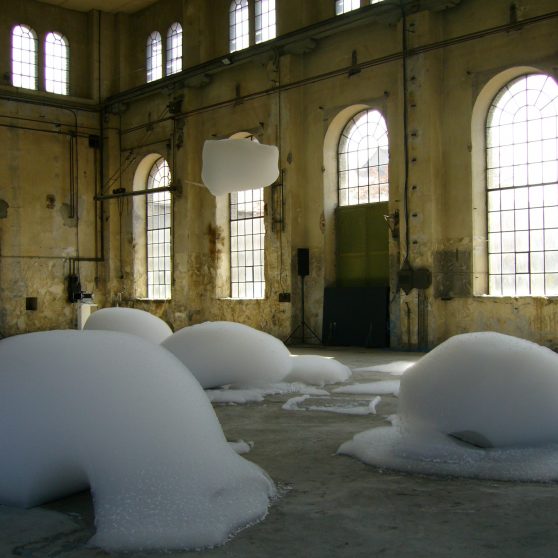 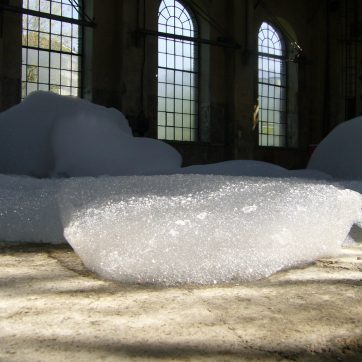 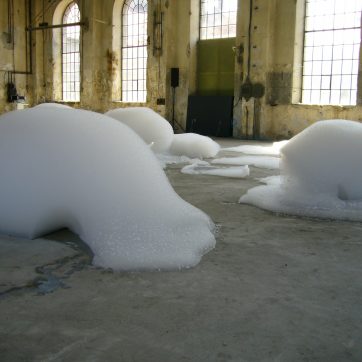 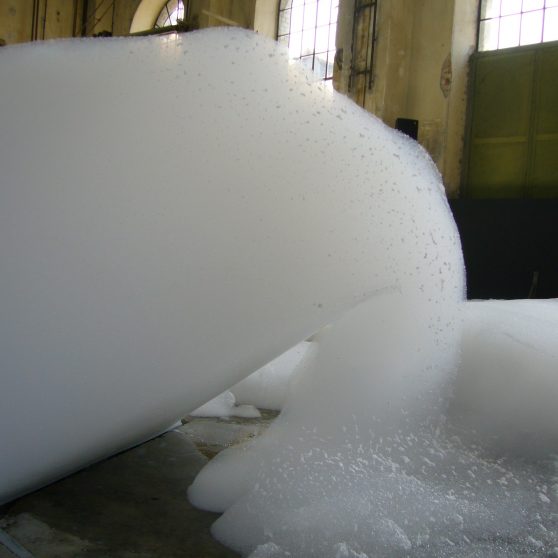 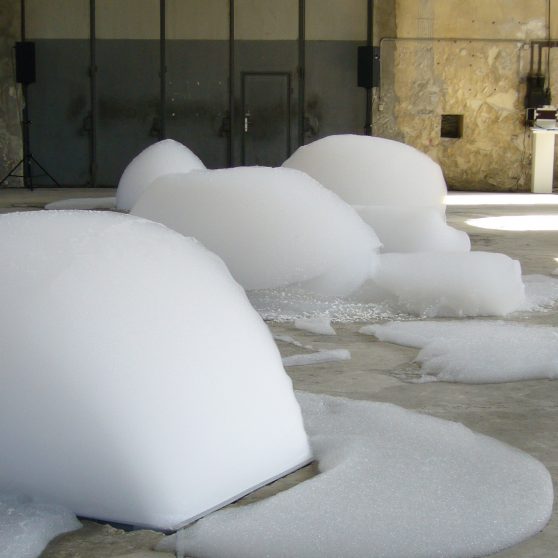 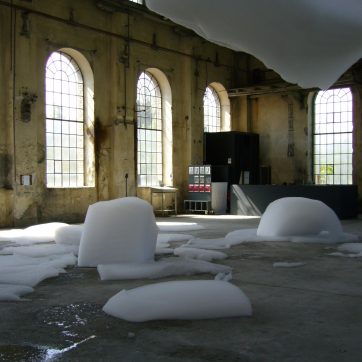 Michel Blazy makes note of the small, inconspicuous things in the everyday world and – like a Jules Verne of art – develops utopian scenes. A boundless mass of organic substance renews itself in an endless loop, as if an indefinable form of life between artifact and nature were gradually taking over the architectural space.

In the Infinite Loop

Michel Blazy’s approach is the experiment, and once more the starting point at Kunstraum Dornbirn corresponds to a laboratory. The artificial area of the lab, the workshop, is central to the heralded and intended process of change in an apriori world of objects. Because such an area consciously ruptures its link to the continuum of external life, it – for its newly emerging internal will – guarantees a timeout from stringent forms of world standing, which means, from those laws of retaliation which foresee the elimination or stagnation of hybrid, artificial creatures.

With its exhibit of Michel Blazy’s works, Kunstraum Dornbirn has created the conditions for unstable connections and alien elements, corresponding, so to speak, to a spheroid that saves the living forms of decay from decimation through regulating factors. The exhibition hall can be seen as an artificial atmosphere where Blazy sits at the controls, a specialist for cryptic life, an activist for the dignity of objects after their fatal decontextualization. In search of still unknown forms of life, Blazy oversteps boundary lines. With instructions and formulas from his inexhaustible fund of ideas, he first of all creates the required conditions of existence for fantastical mutations of ordinary things, whose secret, post mortem vitality he has discovered by tenacious observation.

Michel Blazy’ works are microcosmic models for multidisciplinary studies of the living system. He meticulously focuses his attention on the small, inconspicuous, everyday things. These are unusual usual products serving immediate human needs and taken from DIY shops, agricultural or grocery markets or from nature, which Blazy declares to be his work material, thereby intervening in their significance, including culturally connoted ones. He thereby reacts explicitly to the processes that result from the properties of the chosen substances and invents dynamic definitions. On the one hand, he integrates incalculable phenomena such as loss of control or chaos; on the other, constant factors such as time or the circadian rhythm of night and day come into play. Blazy’s paintings, sculptures and installations, after minimal intervention, develop as though on their own and define new circuits pure and simple.

The installation “Falling Garden” conceived for Kunstraum Dornbirn is de facto alive and, as an artificial organism, reacts to light, temperature, humidity and their fluctuations. The passing and exploring visitors likewise play a role, as they make their different ways through the installation, to perhaps cause by their movements the individual sculptures to sway or – as a crowd – have an influence on the atmospheric conditions in the exhibition hall.

Since the mid-1990s Blazy has been experimenting with foam. The installation in Kunstraum Dornbirn – his first all round conception of its kind – ruptures spatial boundaries and functions as a detector of the atmospheric tension generated by the architecture of the former assembly hall. From depressions in floor and ceiling voluminous sculptures grow. Basically these are markedly fragile cocoons, weightless bodies and plants that the artist has bred from bath foam, whereby the structure – interconnected, coordinated, three-dimensional – borders on the monstrous. Like a garden, the installation demands constant cultivation. Along with its immediate reaction to the atmospheric conditions and thus to the resulting effects on its volume, it is in a state of permanent transformation and is defined by two distinct levels of movement. While on the floor single bodies of foam are under steady formulation and thus suggest a movement relatively frozen in place, this continuity and flow is abruptly interrupted when single parts of the sculptures that are produced under the roof become detached and, at intervals, sail like projectiles downwards through space. From this complex frame of reference, the verticals in the room are newly fixed and, beyond this, suggest moments of zero gravity.

In interplay with the foam sculptures, the walls in the Kunstraum are quite broken into at those places that Michel Blazy has treated with agar-agar, a jelling agent from algae used in the Asian cuisine. An encircling band shows ephemeral traces of a painting that has become self-operating and, if applicable – that is, provided the substances are active – sound is added to the otherwise silent performance in the museum. The amorphous material that appeals to all of our senses corresponds to Blazy’s motifs of metamorphosis and transformation. The seductive aesthetics of his objects and scenarios results from the properties of the material he uses, which are for the most part industrially produced and therefore already possess a specific design. Blazy is hereby concerned with observation, not with external surfaces. His works are spectacles and involve the individual viewer just as much as a larger public.

The installation “Falling Garden” was developed in close relationship with the architecture and became possible exclusively through the specific givens of the factory assembly hall, for it is here that the artist could work with a flexible spatial structure that represents an antithesis to the classical white cube and could treat the exhibition room like a transformable stage. Thus, without revealing the technical construction behind the installation, a boundless mass of organic substance renews itself in an endless loop within Kunstraum Dornbirn, as if an indefinable form of life between artifact and nature werde gradually occupying the architectural space. “Falling Garden” is in daily production during the opening hours of the exhibition. The air supply is hardly interrupted when nothing else remains behind but a fleeting trace of Soap. 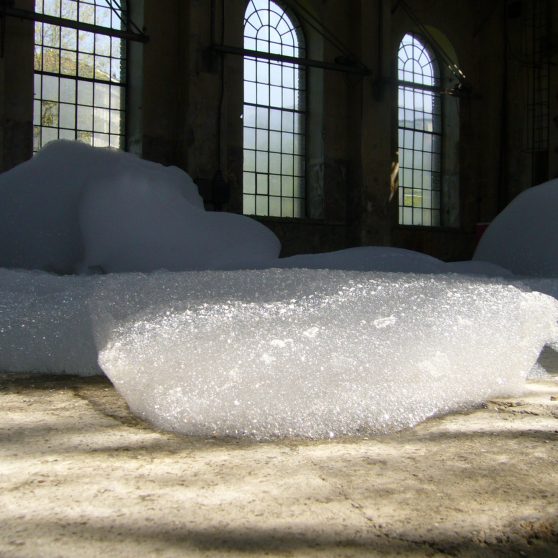 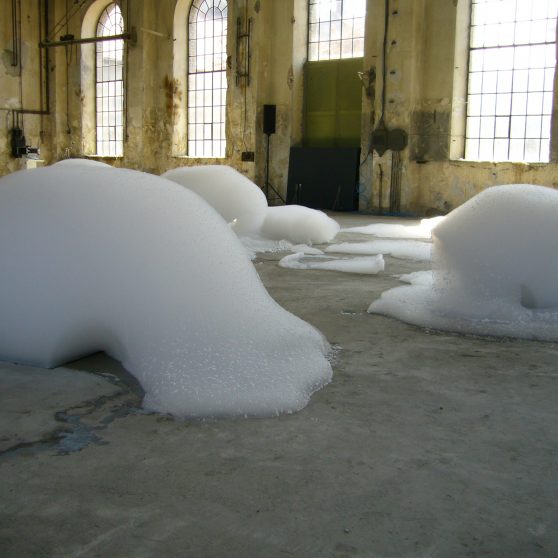 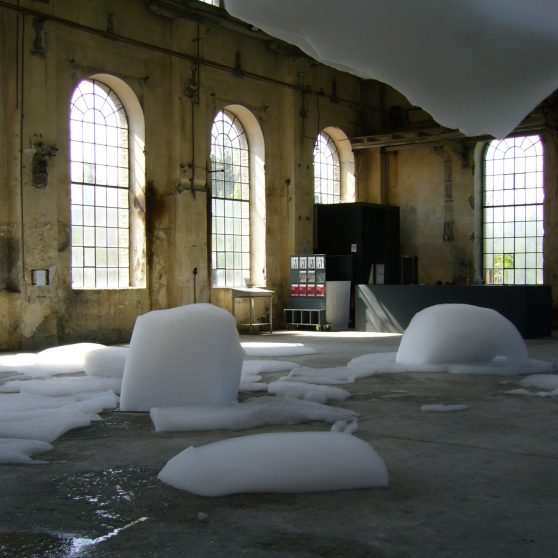 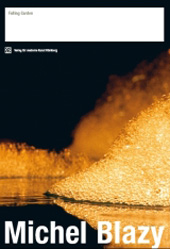