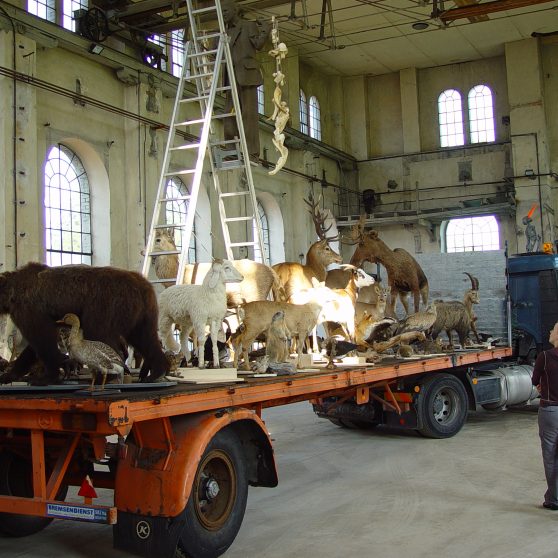 Out of Eden Playback

We had to get out of the land of honey, and so we invented the world of continuous progress. Now we find ourselves on the brink of catastrophe.

We are the antiquities of tomorrow. Naturalised fossils of the third millennium.

Occasionally we hear an echo from Eden – and so we think of a nature which is still nature, even when no humans remain to think this.

Gloria Friedmann’s installation work using animals both stuffed and living, and ‘tableaux vivants’ is well established, and deals provocatively with the gap between nature, culture and civilisation. In her work, people as well as animals are material, to be used as raw materials or even waste, something unusable with potential re-usability. Friedmann takes issue with our own definition of useable and non-useable things or creatures, and confronts us with them. She declares herself as an interested party, responsible for mankind and nature. Her proclamations are critical and engaged and do not demur from ethics, but are not confined to a particular social, ideological or political stance. Friedmann sees herself as a part of the elemental contradiction of human existence: “Nature and myself. As part of nature, I myself am nature and at the same time am myself. Hence my interest in nature, outside of the human context, outside of myself.”

For Kunstraum Dornbirn, in the context the all-embracing economic imperative, Friedmann is installing a modern Noah’s Ark. In this instance, the necessary area of survival for animals and humans from varying backgrounds is provided by the loading space of an out of service truck. Cultural, religious, scientific and social expectations are strikingly juxtaposed against the backdrop of industrialisation, consumerism, and the obsolescence society, indicating the seemingly unbridgeable incongruity of nature, culture and civilisation. But it is clear that nature will continue to exist even when no humans remain to think this. 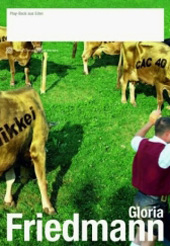