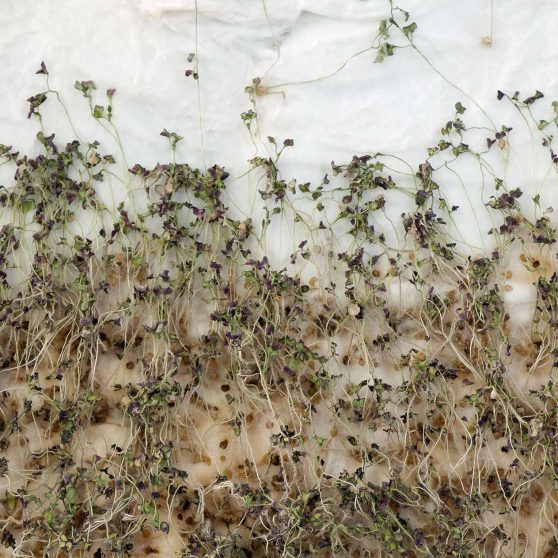 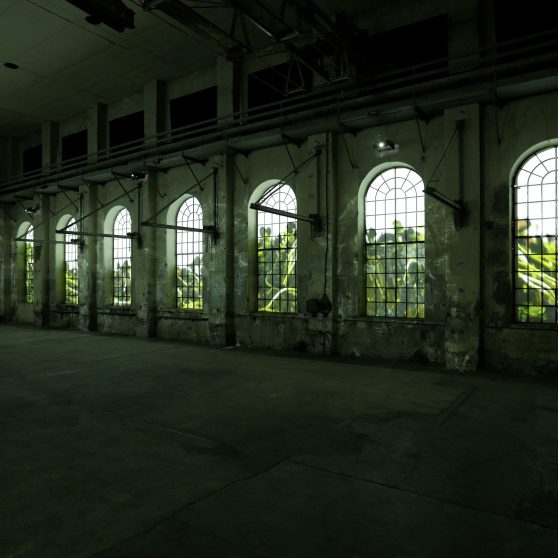 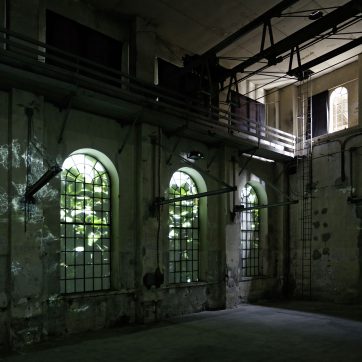 Sleeping Beauty – Tale of an Ambivalent Experience, by Katharina Ammann

You do not need much of an imagination to rethink Kunstraum Dornbirn’s thirty-meter-long hall with its elegant, arched windows as a large room in Sleeping Beauty’s castle. Instead of rose hedges, you watch mustard seed sprout and before long fill the windows to the top. Jungle-like, thick and dark green, the plants proliferate, displace light and leave the room sunk in darkness. However no hundred-year sleep is the result, but a slow decline of the sprouts: they wither, topple over and slump to the ground, so that the room brightens as air and light flood through the windows again. Then they re-germinate, and an endless loop of growth and decline is repeated, thanks to nature’s eternal return.

The video installation “Dornröschen” by Gabriela Gerber and Lukas Bardill can be read and experienced on various levels. The artists deploy the possibilities offered by video technology to reflect on time and space. They work with the concrete architectural space just as much as with the space of the visitors, who are turned into art participants and left to ponder over the multiple meanings of the concept of nature, of the relationship between man and his environment, as well as the dualism of the natural and the artificial. With the reference to Grimm’s fairytale, a further level is plumbed, in which something natural plays a central and name-giving role.

Mustard seeds live and die on the quick. Within fourteen days after sowing, they shoot from the soil, grow tall and, from a lack of water and nutrients, wither again. Nevertheless their growth here cannot be seen with the naked eye; the video camera does the job. Gabriel Gerber and Lukas Bardill reduce the resulting 24,000 photographs to over 400 single shots, which are projected onto the windows in a scant ten-minute loop. In the video the tendrils wind and stretch upwards in, at times, erratic movements that, in these delicate plants, seem irreal and uncanny. You almost feel the snap and rustle. Despite this irritation, there is no doubt that these plants are real, including their life’s span. The magnified enlargement and the temporal compactness in the playback contribute to the fact that this growth and decline is felt as a clamorous and even monstrous process. The gratifying fascination in the power of the life on view reverts to concern about the just as inevitable collapse. Thus an unassuming plantlet, via monumentality and tempo, is turned into an impressive memento mori.

With their video installation, Gerber and Bardill have reacted to the given conditions of the room. The industrial assembly hall has lost its original purpose and been stripped clean. Starting with this state of affairs, the artists developed the image of a building overgrown with verdure. The fact that nature reconquers her place in the sun and covers over the traces of our civilization is an established idea, one that devises a utopian, as well as a horror, scenario. Inside the large, empty room, the impression of desolation is fueled on the one hand by its mighty dimensions, on the other by the expanse that the number of windows encircling the walls open up. The artists have closed off the upper row of windows with dark curtains and, with their video projection, allowed the lower ones to be overgrown, indeed overgreened. They thus explore how the perception of the room undergoes change. Does this closed-in aspect induce a feeling of composure, perhaps even of security? Since the lighting radically influences the atmosphere of a room, the visitor will not be able to deny the changing light situation, all the less so when the multiple projections occupy three of the four walls. Because of the increasing darkness, the room is transformed into a kind of black box in which the emotive affect of the cinematic image is even more reinforced. Concrete space and the immaterial picture plane are made simultaneously visible in a kind of mixed reality. A blend that the artists underscore by fitting the projection of the growing plants exactly into the architecture of the windows. This additionally nourishes the illusion that the plants are not projected onto the windows from inside but are growing over the windows from outside. Visitors moving among the circle of video flicks not only experience them as a “view” but as a physically present subject. It is in this way that the perceptual range of this installation—parallel to the move from light to dark—goes from distance to immersion.

The mixed feelings that can ensue from the aesthetic experience of this installation reflect the thematic ambiguity that the artists pursue in most of their works. At first we evaluate “growth” as principally positive and “passing away” as negative. Yet in the context of this installation in which the growing plants cause the room to darken and shut out the outside world, we can read the subsequent withering of the plants as a deliverance. Also in the fairytale, the rose hedge is twofold. For one, it is invoked by the witch’s curse. The inhabitants of the castle fall asleep for a hundred years, and the castle vanishes under the thorny plants. And two, the same hedge assumes a protective function that assures that those asleep inside come to no harm. There is neither escape nor incursion. Thus proliferating nature is, here too, both blessing and curse, both shelter and prison. The same ambivalence is present in the rose plant itself, which provides the name for the fairytale and the installation [Dornröschen = thorny rose], with the simultaneity of its bloom and its thorns, its beauty and its menace.

With their second intervention “Windlade” (wind-shutter) Gerber and Bardill alleviate the controlled and virtual tension of their video installation without departing from its thematic framework of “nature”, “fairytale” or “space”. On one of the small, upper, arched windows, they have fastened a shutter with a wind rudder so that the wind blowing from the Rhine valley can sporadically open the tiny door. At times daylight flashes suddenly and arbitrarily into the otherwise sealed-off room. In this way the regular loop of the projected plants is not only interrupted but also makes clear that the lighting in the hall has nothing to do with the outside world. The windows are all shut. The light that seems to re-shine between the window frames after the sprouts die is actually the artificial light from the projectors. The shutter not only makes tangibly clear the polarity manifest in the video installation between what is real and what is artificial, but also that between inside and outside, between being snugly safe and being imprisoned. Also in the fairytale the small door takes on an important hinge role because, after its intrusion, the curse oppressing Sleeping Beauty begins to dissolve. In the context of the art environment, the little door signals an unattainable escape route to the outdoors and so interrupts the immersive-appropriating affect of the illusionist experience of the architecture that Gabriela Gerber and Lukas Bardill have devised in “Dornröschen”.

With the related installations of “Dornröschen” and “Windladen”, the artist duo offers a complex device for making us aware of our own, at times ambivalent, perception. For in this complex, we are invited to take up a position in regards to nature and its progression, to illusion and its dissolution, as well as to time and our own finiteness. Like the fairytale itself, this powerful aesthetic experience will be inscribed in our Memory. 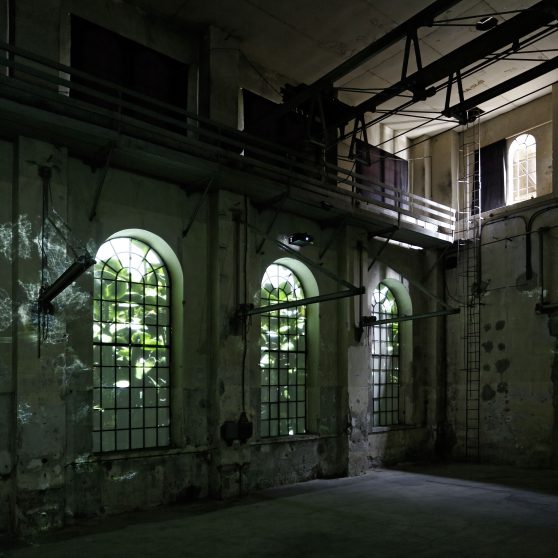 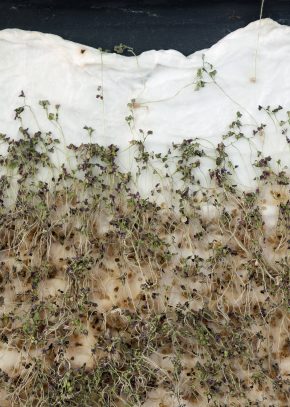 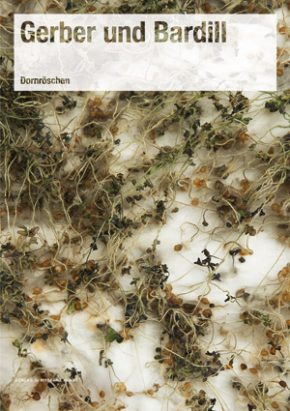