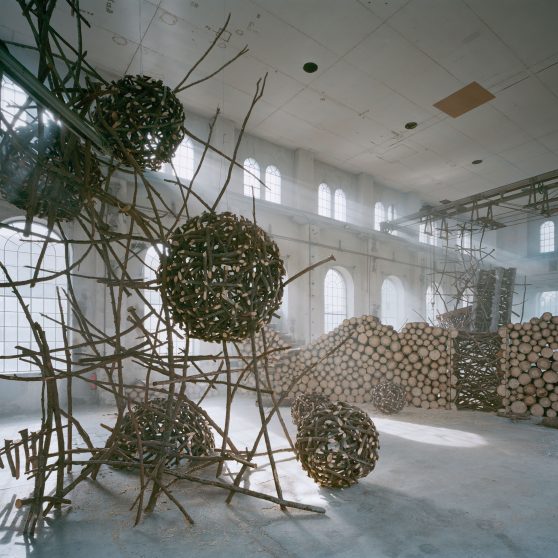 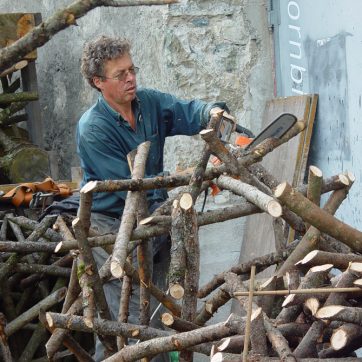 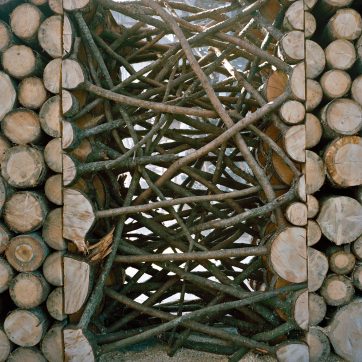 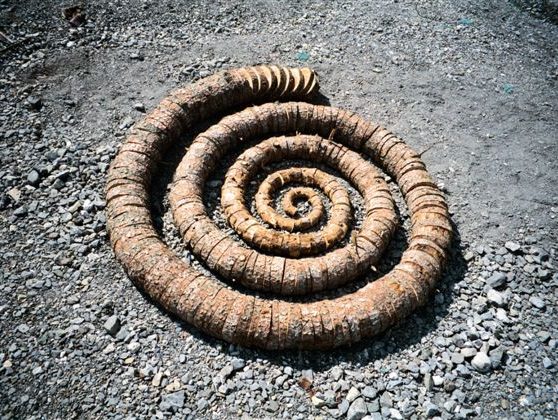 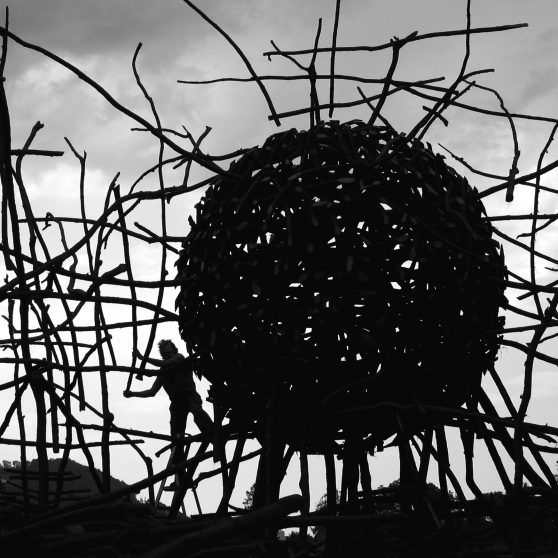 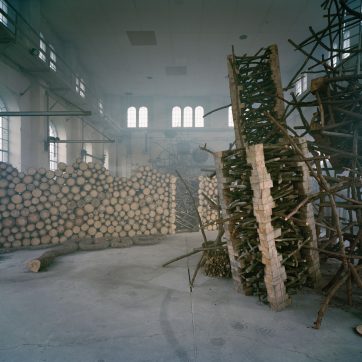 “There’s something artificial about all this wood indoors.”

Urs Twellmann’s artistic praxis is in many respects similar to that of early Land Art: he works almost exclusively in wood, which he mostly transforms into sculptures on site with a chain saw; the finished products are then documented on photographs and simply left behind. The ideas behind all this he develops in his atelier, which he sees more as a laboratory then as a secret locality for artistic production. Twellmann has traveled halfway round the globe to accomplish his works that often vanish just as quickly into the landscape as they emerge from it.[1] In this regard he falls in line with early works by Robert Smithson or Michael Heizer. Even if Twellmann stresses the fact that he does not really feel related to Land Art, he does share with it the aspect of the ephemeral in his works, invisible to a conventional art public.[2]

The work at Kunstraum Dornbirn is for Twellmann a first: he has never before built an installation for an interior space. In his “Forstrevier 3” (forest district 3), the artist worked up 45 solid cubic meters of timber, which in the art business of the 21st century is more unconventional than pure PVC.  “Sculpture in modern times,” as it says in the Dictionary of Art Materials, “has chiefly done away with any association with the natural origin of wood, the tree. Joseph Beuys introduced it again, in its felled and healing state and as an actual plant […]. From this point of view, the reversion to its living origin […] is to be seen allegorically as the most important tendency of working wood into artworks in the postwar era.”[3] Twellmann’s starting point is, however, far removed from any escapist glorification of nature. More important to him is the exploration of the material itself, which sometimes takes on playful features.

Thus the way the installation for Dornbirn developed was a game of trial and error. In the 20th century, the presentation of natural material stands in line with a certain tradition. Robert Smithson, for instance, called the indoor installations “non-sites” that consisted of the natural “spoils” that he brought with him from afar. He came to the point as far as the reflective potential goes that comes into being through such a procedure: “What you are really confronted with in a nonsite is the absence of the site. It is a contraction rather than an expansion of scale. One is confronted with a very ponderous, weighty absence. […] There is this dialectic between inner and outer, closed and open, center and peripheral. It just goes on constantly permuting itself into this endless doubling, so that you have the nonsite functioning as a mirror and the site functioning as a reflection.”[4] In its material profusion and owing to the intensive smell of wood, Twellmann’s installation has a greater physical presence than the objects from Land Art or arte povera do in an institutionalized space. With this the auratic empowerment of institutions, which necessarily first make “art” recognizable as such, is negated.[5] Even the title “Forstrevier 3” (in association with the two Dornbirn forest districts) contributes to this: the room is, at least rudimentarily, drawn into a reality that exists outside of art. In this way Twellmann’s installation differs from the often slick staging of a Smithson or a Giuseppe Penone, which again, and more than ever, makes the artwork untouchable.

[2] “Heizer’s early works in bleak desert regions include a critique of art. He took the step of carrying out projects outside of the art market and without an audience. In contrast to the traditional artwork, his earthworks are neither transportable nor preservable. In his works nature is much more the shaping force, since the signs of art stamped on the earth eventually disappear.” (Anne Hoormann, Land Art. Kunstprojekte zwischen Landschaft und öffentlichem Raum, Reimer Verlag, Berlin 1996, p. 40f).

[5] Brian O’Doherty writes of the “ideal gallery“: “So powerful are the perceptual fields of force within this chamber that once outside it, art can lapse into secular status – and conversely. Things become art in a space where powerful ideas about art focus on them.” Brian O’Doherty, Inside the White Cube. The Ideology of the Gallery Space, The Lapis Press, Santa Monica, San Francisco 1986, p. 6.

In the following conversation, Twellmann explains the way he works and how he coped with the, for him, unusual situation at Kunstraum Dornbirn.

Nina Schedlmayer: You ordinarily work outdoors and frequently just leave your sculptures behind there. Now for the first time you have a relatively large interior at your disposal. How did you approach the installation at Kunstraum Dornbirn?

Urs Twellmann: Originally my objective was to fill the hall. But it is over 14 meters high. The artists who are otherwise invited here tend to do floor installations. It was clear to me that I would use the height. We were able to use a crane trolley and rope hoists to heave things up.

Ni.S.: What links the works in the exhibition is the fact that they all explore the state of equilibrium: in the installation you set the towers in the room’s foreground at a tilt. Towers otherwise always stand erect. Was that planned from the start?

U.T.: The fact that they are set diagonally was indeed a reaction to the spatial situation. I couldn’t set up any object that reached as high as the ceiling. All that remained was to allow something to be in suspension and so make use of the height. The construction that holds it up has a sketchy look: the branches are like lines. The elements in themselves are basically inward-turned trees: it’s a quartered trunk that I have turned inside out.

U.T.: The whole is an artificial forest district. This space was originally an assembly hangar. It is quite different from working in a gallery. You can drive a truck or a crane trolley right in. This hangar would make me a dream of a studio. On the top floor I would build an apartment from where I could look down every evening onto my day’s work.

Ni.S.: The fact that balance and equilibrium play a role: is that something new in your work?

Ni. S.: But there’s a moment of danger that resonates here too.

Ni.S.: How did you get the idea to install a wall of tree branches diagonally into the hall?

Ni.S.: How did you think up the name “Forstrevier 3” for the exhibition?

Ni.S.: A twofold paradox: art in an art gallery would be seen as “natural”, which would make nature in an art gallery into something artificial. Your work, however, seems to have a stronger physical presence than is otherwise the case with Land Art exhibitions in a museum. It is the first time that you have had such a large interior to play with; what was the biggest different to working outdoors? For the first time you have had to structure a space.

Ni.S.: Did you also originally plan the installation with spheres?

Ni. S.: During your work did you come up against situations in which you discovered something or that surprised you?

Ni. S.: What will happen to the material after the exhibition?

Ni. S.: The handicraft aspect of your work seems to mean a lot to you.

Ni. S.: You really don’t think of yourself as an artist?

Ni.S.: Had you imagined it here any differently?

Ni. S.: I am not one who believes that definitions should be so terribly important. But it is a clear statement when you say you don’t make Land Art but “art in environment”.

Ni. S.: Do you feel you’re related to some Land Art artists like Andy Goldsworthy?

Ni. S.: The art dictionary describes very exactly how wood can or should be worked. You do the exact opposite. 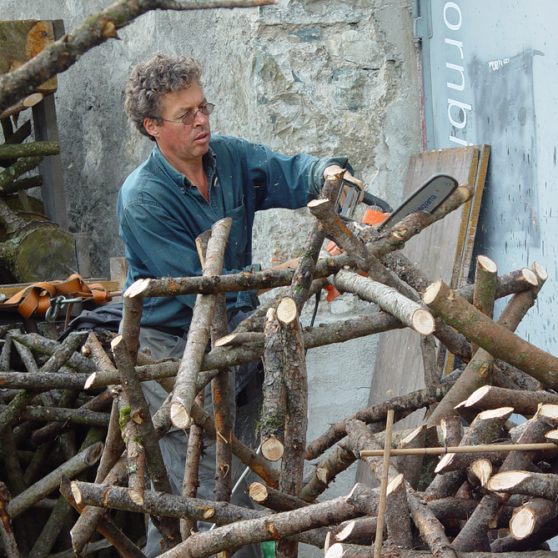 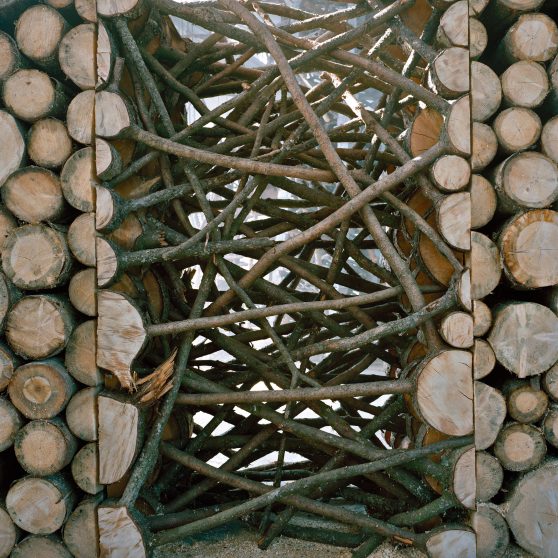 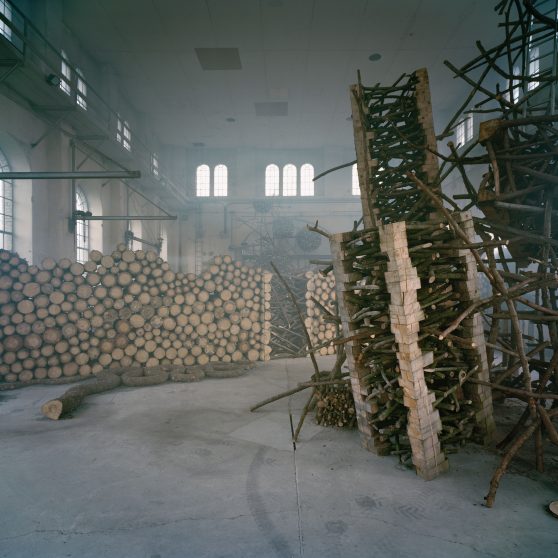 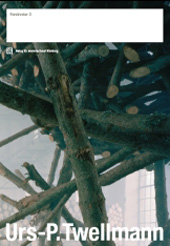